skip to main | skip to sidebar

In case any of you were REALLY worried about Miss Nattypants...don't be.
As you can see, she gets PLENTY of treats. 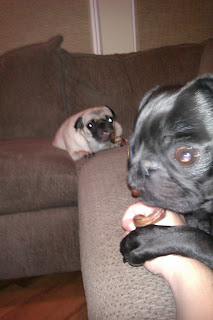 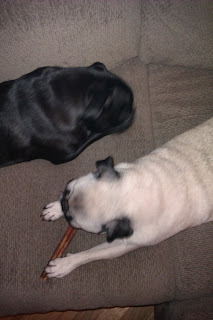 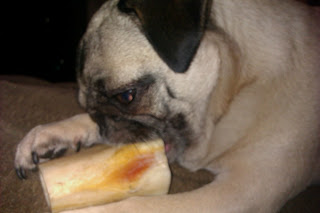 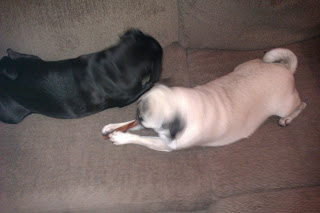 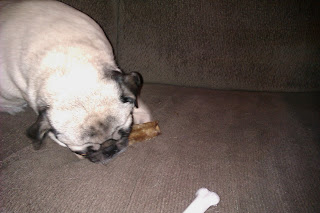 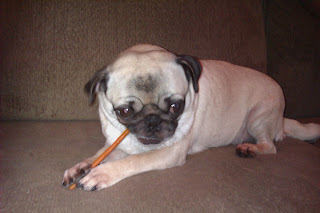 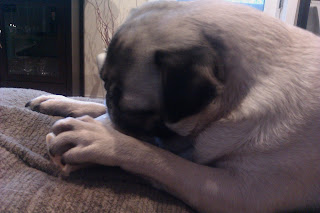 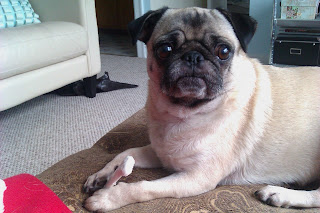 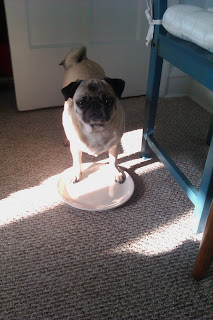 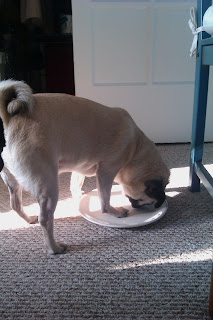 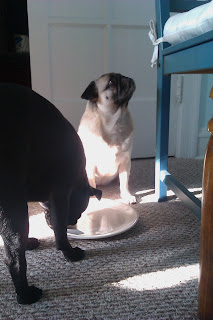 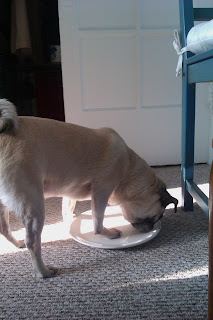 u no can likks it, u iz sikk 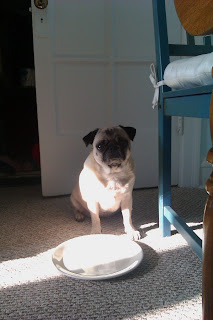 wiw sombuddy pwease hewp me? wot abowt natalie?
Posted by Two Pugs in a Pod at 11:42 AM 11 comments:

We haven't had much time for blogging, but I just wanted to reiterate my thanks to everyone for the support and for the donations. We have a long way to go, but the most important thing is that my little buddy seems to be doing ok. Hip hip hooray! 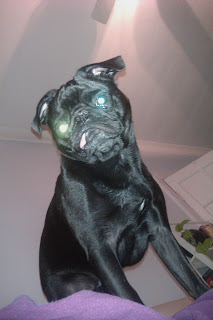 Klausie would like you to know that his glowing eyes, wrinkle chin and tongue face have absolutely nothing at all to do with his illness. This is the way he looks ALL the time, thankyouverymuch!
Oh, my smoochable, huggable, WEIRD little boy. I love you so much.
Posted by Two Pugs in a Pod at 3:51 PM 6 comments:

Phew. What a week.

If you weren't following my freakouts on Facebook, Klaus put me through quite the ordeal this week. Following our "bump" scare and subsequent ER visit, little buddy developed some kind of major GI upset. I'm not sure if it was related to the Metacam that he was given for pain, which can be tough on the stomach, or if this was possibly the issue to begin with (although he didn't test to show signs for pancreatitis, his symptoms sure fit the bill). Regardless, the whole thing made for almost an entire week of sleepless nights for both mama and puggy, and piled on the stress. There is absolutely nothing worse than watching your sweet little buddy suffer and hearing him whimper, and having no idea what's wrong! Even the doctors couldn't offer much explanation, and I didn't know how to help him. I even left him at the vet's office for one day while I had to work, because I was so worried about leaving him alone. (Yeah, this week was INSANE at work. Pile it on, universe.)

Fast forward to this weekend, and he is doing MUCH better. Maybe not 100% yet, but he's starting to do the little things that make him Klaus--sassing at me, barking for his breakfast, demanding affection, picking on his sister. He is such a little BEAST, but I wouldn't trade him for anything. I am so, SO glad to see him feeling better. And I am so thankful for all of the support that I received from all my friends here. I can't even begin to tell you all how much it means to be able to share experiences like this with people who KNOW. You listen, you respond without judgment, you help to share the load.

So now that the immediate crisis is over, I'm left to pick up the financial pieces. It was suggested by many of you that I consider starting a chipin, and I've gone back and forth with the idea because I don't want to seem like a moneygrubber. It's not the most important thing, and the emotional support that I've received here now (and before) is worth its weight in gold. Finally, I decided that it can't hurt to create one (the amount is exactly half of what his total expenses are) but I don't want anyone to feel pressure to contribute. Any help will be appreciated beyond measure, but it's not in any way expected. I'll leave it at that.

As proof of his return to health, I'll leave you all with a video of The Bean himself. This is what Klausie thinks of the antibiotic ointment that I'm supposed to put on his bump twice a day. (Yeah, right. Good luck with that.)

Oh, and please ignore the giant piles of laundry everywhere. Did I mention that it was a rough week?

I took Klaus to the vet yesterday afternoon to have a bump on his leg looked at. They couldn't get a great sample, but the vet didn't see any obviously bad cells, so he sent us home with some cream. I felt relief. Klaus was himself.

Nine hours later, I came home from the Blackhawks game and Klausie was acting weird. Uncomfortable, and unable to settle down or sleep. I chalked it up to an upset tummy from too many treats at the vet, but after a sleepless night, at around 6 am I couldn't take it anymore. He was clearly in pain, so off to the ER vet we went.

$625 later (on top of the $200 from the regular vet) I have no answers. It could be a vertebrae which looks just slightly narrowed. It could be internal. All I have is some Metacam and instructions to restrict his activity. His blood panel was normal. He doesn't want to walk outside, but he did eat his boiled chicken. He's hunched. He's hurting.

I never thought I would say this, but I'm starting to understand how someone could love their pet enough to give them up. I don't think I ever could, because it would kill me, but I'm so at the end of my rope. I'm scared. I'm tapped. I'm living on my own for the first time and these medical scares just keep knocking me down each time I'm close to ok. I'm afraid I won't be able to care for my babies, even though I'd feed them before myself every time. What if this is something I can't handle?

I know this is a safe place to vent because the only people who read this blog love their pets as much as I love mine. I so want to be able to do this on my own, but it's terrifying sometimes. I just want him to be ok.

Send some good thoughts and love into the universe for us tonight, will you? I'm cuddling my babies and saying a prayer. Maybe tomorrow everything will be fine, but tonight it's just...hard.
Posted by Two Pugs in a Pod at 7:04 PM 19 comments:

Two Pugs in a Pod
And so it begins... A chance encounter on a family vacation spawns a lifelong obsession with all things pug. This is the chronicle of one little girl's fantasy as it becomes her adult reality. 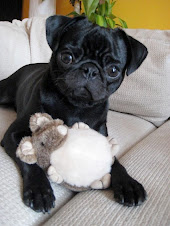 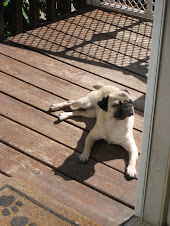 "He is your friend, your partner, your defender, your dog. You are his life, his love, his leader. He will be yours, faithful and true, to the last beat of his heart. You owe it to him to be worthy of such devotion." 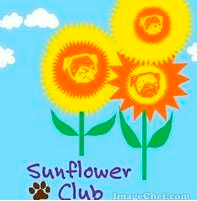 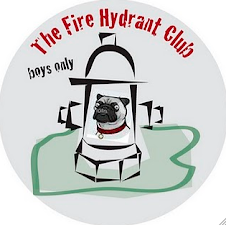 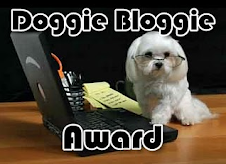